A bit about us:

The Staffordshire & Worcestershire Canal Society is one of the oldest established and most esteemed canal societies in the country, serving to safeguard, promote and develop the interests of the Staffs & Worc for the benefit of everyone.

The Society was formed in 1959 to save the canal from closure, and due to these efforts the canal was reclassified as a cruiseway in 1968. Since then the society has been instrumental in the canal as we now know it.

The society is a registered charity and is run completely by volunteers, who have a love of the canal and everything relating to this. Not all our members are boat owners, just people with a taste for things waterway orientated.

We have a democratically elected committee who endeavour to represent the members thoughts and recommendations to all the waterway governing bodies. Any member is encouraged to join in with this. So what are you waiting for?

A short history of the canal:

The Staffordshire & Worcestershire Canal (SWC) was the brainchild of James Brindley. It runs for 46 miles between Great Heywood, where it meets the Trent & Mersey Canal, and Stourport, where it locks into the River Severn. 31 of the 43 locks raise it some 292 feet from the river to a 10 mile summit between Compton Lock and Gailey before the remaining 12 lower it to Great Heywood Junction.

The canal was cut with little more than picks and shovels using Brindley’s methodology of following the natural contours of the land, and became an immediate success following its opening in 1772. The carriage of Cannock coal became a staple, and trade continued on some stretches until well into the 1960s. The line was not restricted to industrial usage and once there were more than 100 watermills along its length.

It makes connections with the Birmingham Canal Navigations at Aldersley, the Shropshire Union Canal at nearby Autherley and the Stourbridge Canal at Stourton. The derelict Hatherton Branch at Calf Heath, that once connected with the northern Birmingham Canal Navigations, is being restored; the former Stafford Branch is now an un-navigable culvert; and the short Hazelstrine Branch is home to a boat club.

Following it’s commercial demise it was classified in 1968 as a ‘cruiseway’ and in 1969 was declared a conservation area. The canal passes almost exclusively through rural or semi-rural landscape and is arguably one of the prettiest in the country.

Bratch Locks are unique; Stourport, formerly Lower Mitton, is one of a handful of towns that owing it’s existence to the arrival of the canal and Tixall Wide is an idiosyncratic solution to the landowners condition that his view must not be blighted. 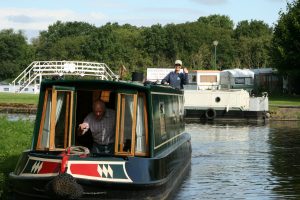